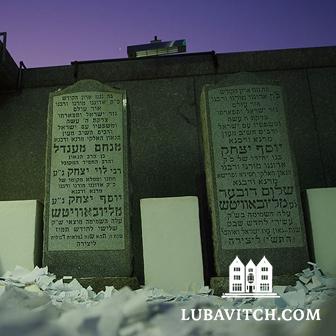 (lubavitch.com) Residents of quiet Cambria Heights, Queens, are watching neighborhood traffic swell this week as visitors begin to stream through the little house at the corner of Francis Lewis Boulevard, leading to the Lubavitcher Rebbe’s resting place at the Old Montefiore Cemetery.

Numbers will top off at around 50,000 on Thursday, June 25, when most will arrive at the Ohel, as the Rebbe’s gravesite is called, to mark the 15th anniversary of the his passing, the third day of Tammuz.

In a custom that gains traction with each passing year, people travel from as far as New Zealand and China to the Ohel, for the opportunity to reach out in prayer, to seek solace and blessing on the Rebbe’s yahrzeit.

Rabbi Abba Refson, director of Chabad activities at the Ohel Chabad-Lubavitch, says planning for this week began months ago, with heavy coordination in all areas, to ensure a smooth, manageable experience for both the community and the visitors.

Funded year after year by annual donors “who generously contribute towards this week’s expenses,” Refson admits that there’s never enough for such an intense week, and he typically comes up short. This year, however, “we have been doubly blessed, and have been able to introduce additional initiatives and expanded accommodations, thanks to the generous sponsorship of Mr. Guma Aguiar.”

With Aguiar’s funding, Chabad at the Ohel will be setting up an 18,000 square foot air-conditioned pavilion that will house up to1,000 people in rotating shifts who will need accommodations, food and lodging, over the course of the next few days. “It’s going to make a huge difference,” says Refson.

Aguiar, the founder and CEO of Leor Energy, whose name is becoming well known in Jewish philanthropy due to his support of Chabad-Lubavitch and other philanthropic projects, says he chose to give to Ohel Chabad-Lubavitch, “because I feel passionately about wanting to bring people closer to the Rebbe.

“The Rebbe touched every Jew in the world, and I want to do my part, to help give people this important opportunity to connect with him on his yahrzeit.”

Indeed, Aguiar is also sponsoring a chartered plane to fly about 200 Chabad representatives and community members from his home-state of Florida, to the Ohel and back, on Thursday.

“Guma is passionate about Chabad, and about helping perpetuate the Rebbe’s legacy,” says Rabbi Moshe Meyer Lipszyc, Chabad representative to Ft. Lauderdale and a close, personal friend of Guma’s.

The mix of people is as varied as their origins: Jewish and some non-Jewish, religious and secular, men, women and children, come to honor the Rebbe’s life, to connect with the soul of this giant, to find a moment of spiritual clarity and nurture on this auspicious date, when the soul of the departed is said to be especially receptive to interceding in behalf of supplicants.

The lines are unusually quiet. And long. Visitors can expect to wait anywhere between one and three hours, says Rabbi Refson, but they use the time to pray silently, and contemplate. Those fortunate to have met the Rebbe during his lifetime, focus on their encounters with him. In Chasidic tradition, dedicating time to prepare oneself for a private audience with the Rebbe is said to greatly have impacted the experience.

“In a way,” says Rabbi Refson, “the long lines allow people to prepare for their visit to the Ohel, and to get into the right mindset before their “encounter” once inside the enclosure, where the Rebbe is buried side-by-side with his father-in-law and predecessor, Rabbi Joseph I. Schneersohn.

Groups of 80 will be allowed in to the small space, where they will have two minutes to pray and ponder, read and shred their personal hand-scribbled notes for blessings at the Rebbe’s headstone.

For residents of Cambria Heights, the scene is a familiar one, which they generally regard with respect, says Rabbi Refson.  To help them prepare for the these heavy-traffic days, he sent letters to all Cambria Heights residents, assuring them of regular clean up, police security, and generally quiet decorum.

He also invited representation from all the blocks in the neighborhood to meet with him several weeks ago along with municipal agencies.

“All the relevant agencies including cemetery staff, police, sanitation, fire, parks dept. DOT and the Mayor’s office, were wonderfully cooperative when we met to discuss how we’re going this to make it easy and smooth for everyone involved,” says Refson.

At the Ohel itself, extra personnel will be managing crowd control, hospitality, food, refreshments and accommodations. Though Refson prefers to keep a low profile at the Ohel out of respect for the private nature of the experience, rabbinical students will be working with him to be available for visitors who choose to call on them.

Many traveling long distances make this their only destination. With JFK just a five minute drive away, they may spend no more than a few hours at the Ohel, before heading back to the airport to catch a return flight.

Others will linger on, some remaining through Shabbat, absorbing the inspired atmosphere, the Chasidic warmth, the melodious prayers and long farbrengens before they integrate once again, into the frenetic pace of life beyond the gates of the Ohel.

Come Sunday, the crowds will begin to disperse, and traffic will return to its normal pace.