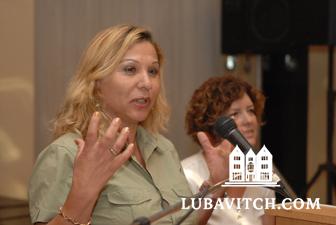 Chabad’s Terror Victims Program in Israel is in the process of writing a Torah scroll that will have letters inscribed by family members and survivors of all of Israel’s terror victims.

Periodically, explains Rabbi Menachem Kutner, Director of Chabad's Terror Victims Program, the Torah scroll is brought to the sites of past bombings, and family and friends are called to inscribe a letter for the memory of their loved ones who were killed.

“We’ve been all over Israel, to numerous sites of terrorist attacks, with the Torah scroll.”

At one such recent event, survivors and family members spent an evening together, finding mutual empathy in their shared life experiences. It was not unusual then, for Chana Cohen who survived a bomb attack many years ago, to be relating her own story to Yaish, who lost his daughter in the infamous Bus #20 explosion, in Jerusalem.

Chana was a 6th grader at the Tachkemoni elementary school in 1970 when a katyusha exploded near her, she told Yaish. Trapped in the engulfing flames, she remembers being pulled from the fire by someone. The explosion killed her two schoolmates, Tzipora Sabag and Shula Levi, but someone got to her before the fire did.

As Chana described her ordeal in detail to Yaish, he recognizedthe story, and tells Chana that he's heard it, in all its precise details, once before. He heard it, he says, from his brother, the stranger who jumped into the inferno and pulled Chana out.

Within minutes, Yaish had his brother speaking with Chana on the phone.

Emotions in the room were uncontained as Chana went up to the podium spontaneously, and shared the details of her story, and how she closed a circle that evening.